As the world's 13th largest country by area, it is no surprise that Saudia Arabia is also one of the most populous countries in the world. The city of Riyadh is the country's largest, boasting a population of over 4 million, which contributes heavily to the total population. In addition to Riyadh, there are three additional cities that have populations exceeding one million. There are also 19 cities that have over 100,000 residents, and an additional 44 that each surpass the 10,000 person milestone. These cities are spread across Saudi Arabia's 13 different regions. Each region also has a capital and governorates, which are further divided into sub-governorates. There are a total of 118 governorates in this country.

With such a large population, the majority of Saudi Arabian residents live in the urbanized cities. Just 17% of the population lives in the country's rural areas, while the remaining 83% live in the larger cities that provide more opportunities, both in industries including oil, finance and agriculture, and education. This is a dramatic decrease from the 1960 recorded rural population of 69% of the population. Like many other countries, however, the development and expansion of cities, combined with migrants and natives moving to the cities, has contributed to the decline in rural populations.

The map shows Saudi Arabia, officially the Kingdom of Saudi Arabia, a desert country in southwestern Asia (Middle East) that occupies most of the Arabian Peninsula.

The kingdom is bounded by the Gulf of Aqaba and the Red Sea in the west and the Persian Gulf in the east. Border countries are Iraq, Jordan, Kuwait, Oman, Qatar, United Arab Emirates, and Yemen. Saudi Arabia shares maritime boundaries with Egypt, Sudan, and Eritrea in the Red Sea, and with Iran, and Bahrain in the Persian Gulf.

The country is the largest Arab state with a land area of more than two million km²; compared, the sheikdom is about four times the size of France, or somewhat larger than one quarter the size of the contiguous United States.


Saudi Arabia has a population of 34.8 million people (in 2020); more than 10 million people are expatriates, mainly from Asia and the Middle East.
Saudi Arabia is the homeland of Arab Bedouins and the Arabian language, the historic birthplace of Islam and the Arab-Islamic culture which originated in the towns of Mecca and Medina at the beginning of the 7th century.

The country's capital and largest city is Riyadh. Other major towns are Jiddah, Ta'if (At Taif), Dammam, Buraydah, and Al Khobar, part of the Dammam metropolitan area. Spoken language is Arabic.

The Arabian Desert covers large parts of the country's landscape. The vast area consists of a number of interconnected desert regions including the An Nafud in the north, and the Rub' al Khali ("the Empty Quarter") in the southern part of the country. The Rub' al Khali is one of the world's largest contiguous sand deserts.

The coastal plain in western Saudi Arabia along the Red Sea is known as the Tihamah, the east of the plain is dominated by the escarpments of two mountain ranges, the Hejaz and the Asir mountain range, separated by a gap in the area of Mecca. The highest point of Saudi Arabia is Jabal Sawda, the peak of about 3,000 m is located in the Abha region in the Asir mountains in the southwestern corner of the sheikdom. The one hundred kilometers wide strip of coastal plains and the western mountain ranges is known as the Hejaz ('the Barrier'). The Hejaz separates the coastal area from the Najd, the central region of Saudi Arabia. The Najd is bounded to the east by the historical region of Eastern Arabia, and in the north by the Syrian Desert.

There are no rivers or bodies of water in the country, only ancient river channels, now buried by the seas of sand. There are wadis, i.e. valleys or river courses, which often carry water temporarily only after heavy or prolonged rainfall. Nonrenewable fossil water from aquifers and underground rivers, water from seasonal floods, and desalinated saltwater are used for human consumption and irrigation.

Climate
Saudi Arabia has a predominantly hot and dry environment. The continental climate in the interior of the country features considerable temperature differences, especially between day and night. In summer, maximum temperatures of 50° C are possible during the day, in winter, the freezing point can be reached at night. The average annual temperature is 28° C. 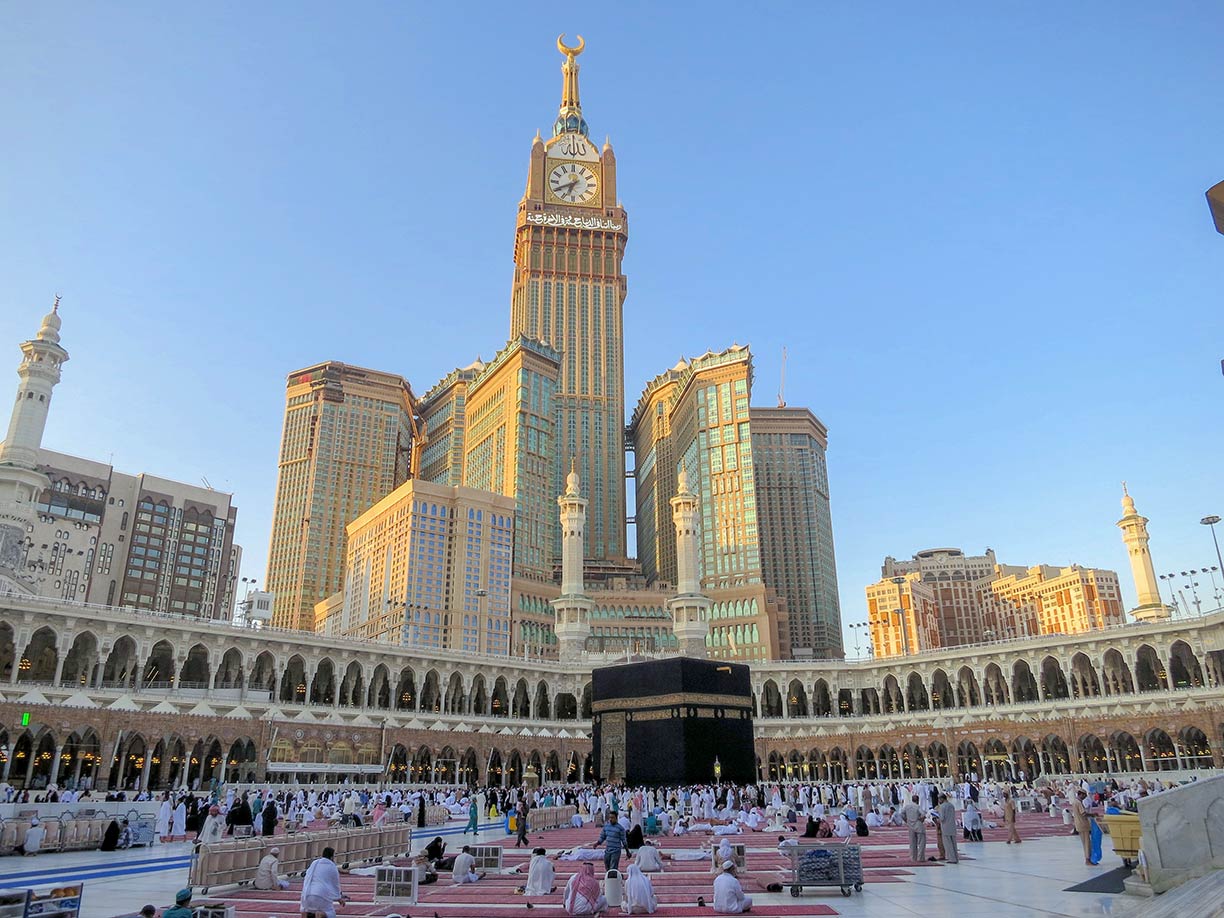 Al-Masjid Al-Ḥarām, the Great Mosque of Mecca. Located within the largest mosque in the world is the Kaaba, the holy shrine of Islam. Abraj Al Bait in background, a megatall hotel complex of seven skyscrapers.
Photo: neo saed

Saudi Arabia is divided into 13 administrative regions (or states).

The regions are (region capital in parenteses:)

The map shows the location of following Saudi Arabian cities and towns:

The most populous cities are: Riyadh, Jiddah, Mecca, Medina, Ta'if (At Taif), Dammam, Buraydah, and Al Khobar, part of the Dammam metropolitan area.

Population of All Cities in Saudi Arabia

10 Reasons to Consider Relocating to the Middle East

10 Years: Why has the Syrian civil war lasted so long?

11 Things NOT to do in Israel

12 Most Popular Cities In Turkey

Beautiful Places To Visit In Israel

What are the best Historic Sites in Israel?

15 Most Beautiful places in Iran

A List of 22 UNESCO World Heritage Sites of Iran